Do Business in the Copper Coast

Do Business in the Copper Coast

The Copper Coast is a highly desirable lifestyle location of choice as confirmed by recent surveys which identified the area as one of the most popular holiday and retirement destinations in Australia and is home to 15,000 permanent residents.  The Copper Coast is a particularly popular destination for holiday makers wishing to enjoy some of the best beaches and fishing on offer in South Australia as well as those visitors wishing to transition into retirement.  It is located a comfortable hour and a half drive north-west from Adelaide, South Australia’s capital city and is the fastest growing local government area in regional South Australia.  The climate is borderline dry Mediterranean/Semi-Arid with seasonal temperatures a few degrees above Adelaide’s and the weather patterns are similar to those of Adelaide.

The Copper Coast is home to the Yorke Peninsula's three largest urban centres of Kadina, Moonta and Wallaroo. The Peninsula's retail sector is largely based around these three centres whilst Kadina is recognised in the State Planning Policy Framework as the commercial and industrial hub of the Yorke Peninsula.  The most significant industry sectors are broad acre farming, fishing and tourism, supported by health and growing aged care services.  With the introduction of the National Broadband Network (NBN - 100mbps -fibre to the premises) the Copper Coast is well placed to engage with national and global markets while offering exciting opportunities for improved productivity and business efficiencies.

The Central Business Districts (CBD’s) of the three towns offer a diversity of general and specialist stores supported by many smaller retail outlets and business services.  The retail service include major brand names like ALDI, Woolworths, Mitre 10, Stratco, Foodland and fastfood outlets like McDonalds, Subway and Hungry Jacks. The 3 urban areas currently occupy approximately 19 km² of the total Council area with rural farms constituting 97.5% of the district.

For a detailed look at the Economic Profile of the Copper Coast as produced by Deep End Services as of April 2018 please click the menus below.

State Government forecasts released before the 2016 Census indicate the Yorke Peninsula will grow to almost 30,000 people by 2026 – an increase of 1,600 people. The Copper Coast townships will accommodate all the region’s projected growth with stable population levels across the balance of the Peninsula. The forecast for Copper Coast of 1.1% average annual growth for the next 10 years (or +161 people per annum) appears conservative based on the last 10 years averaging +278 people per annum. 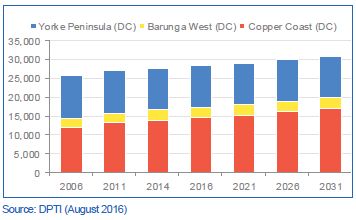 There has been strong and steady growth in the Copper Coast townships in the last 15 years. Between 2001 and 2016, Kadina grew by 690 people, Wallaroo by 1,020 and Moonta-Port Hughes by 1,320 people. At Port Hughes, new owner-occupier and holiday
homes are being built in the Patrick’s Cove and The Dunes golf course estates. Wallaroo has become a popular destination for retirees and ‘sea changers’ with new apartments and housing in the canal estates of Copper Cove Marina. The $220 million Wallaroo Shores development is under construction on 18.5 hectares of foreshore land. The project will include 650 dwellings, a hotel complex, resort apartments, retail and restaurant areas. Private works valued at $7m have been contracted to Council for completion by August 2018. 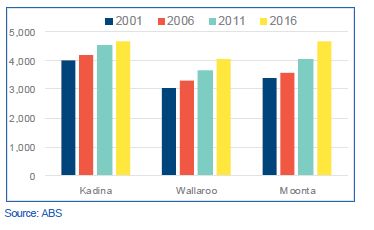 As a single market, the three towns had a 2016 Census population of 13,433 - comparable to the Riverland towns, Port Pirie and Port Augusta. 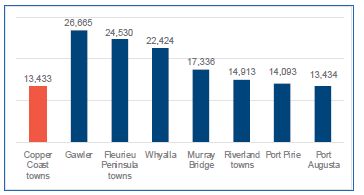 In terms of population growth, the Copper Coast towns had the highest growth rate of all regional areas of South Australia between 2011 and 2016.

Kadina and Moonta were founded on rich copper deposits mined by Cornish migrants from the mid-1850’s. Today, the region’s economy is based on arable farming (barley, wheat, legumes, canola, chick peas and field peas), an associated engineering and services sector, commercial fishing, tourism and government services. The largest industries of employment in the townships are Health care & social assistance (17%) and Retailing (15%) while across the broader catchment of 20,000 people it is Agriculture and fishing (18%).

Although Kadina has a similar population to Moonta, its role as the main centre for the Yorke Peninsula is underlined by the size of its daily workforce. At the 2016 Census, there were 2,421 jobs in Kadina (or 55% of all jobs in three towns) compared to approximately 1,000 each in Moonta and Wallaroo.

The employment mix of each township reflects the varying commercial and service role that each performs within the region.

Kadina
Retail trade is the largest sector in Kadina, providing 18% of all jobs. The town’s regional retail role is underlined by floorspace surveys which show Kadina has 60% of all retail floorspace in the three townships. Other significant sectors in Kadina are Public
Administration & Safety - reflecting the local council and state agency offices - Finance & insurance and Education & training. Pre-schools, a primary school, two secondary schools and a TAFE generate 12% of all jobs in Kadina.
Moonta
Construction is the largest employment sector in Moonta with 16% of all jobs – well above Wallaroo (8%) and Kadina (4%). The strong home building market and coastal lifestyle has attracted builders, trades and other contractors to the town. The 80- hectare Dunes Estate around the championship golf course will ultimately comprise 227 residential lots. Employment in Commercial accommodation and retailing is also significant in Moonta.
Wallaroo
The Wallaroo Hospital and Health Services dominates employment in Wallaroo, contributing most of the jobs in the Health & Social Assistance sector that makes up 28% of all jobs in Wallaroo - more than double the proportion of other towns. Like Moonta, Accommodation & Food and Retailing are the next largest sectors.

The average unemployment rate across Kadina, Wallaroo and Moonta was 8.8% at December 2017 – slightly above the state level (6.2%). Rates had fallen from a peak of 12% in 2015/16 but lifted in late 2017 against a slightly improving state-wide trend.

South Australians dominate the Yorke Peninsula visitor market, making up 89% of the 485,000 annual visits and staying 1.7 million visitor nights per year. The region also receives 535,000 day-trips per year. About 95% of all visits and visitor nights are classified
as ‘Leisure’ – either for holidays or visiting friends or relatives. Two thirds of all visitors stay in residential accommodation (friend, rented or own dwellings) with 25% either camping or in caravan parks. Visitors are attracted to the Peninsula’s family friendly
reputation and broad range of leisure activities. In 2013/14, tourism contributed an estimated $236 million to the Yorke Peninsula’s economy. It employed 900 people directly in the tourism industry and indirectly supported another 1,500 jobs. 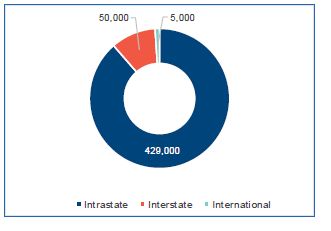 Retail spending levels at the small area level are modelled from ABS Household Expenditure Survey results and local area income and other characteristics. Average annual spending per capita by Copper Coast area residents in seven major categories is shown in. Annual spending on Food & Groceries is modelled at $5,864 per capita or about 2.9% above the SA average. Packaged liquor is about 2% below average. The discretionary spending categories of dining out & restaurants, clothing & accessories, leisure & general
(comprising recreational goods, books & stationery) and cosmetics and household goods and services are all slightly below the SA average – reflecting the older and lower income profile of the catchment. The average annual per capita spending level of $13,477 for catchment area residents is about 3.5% below the SA average. Population estimates combined with per capita spending levels generate the retail spending market for each major product group. The overall spending market in 2018 is estimated at $289.8 million. More than two-thirds is generated by the Primary catchment. Food & Groceries is the largest category at $126 million or 43% of all spending. 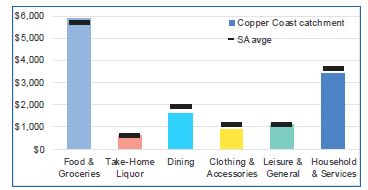 A 2012 survey and report of Copper Coast ratepayers by the University of Adelaide gathered data on where residents shop for food and groceries and non-food, household goods and clothing. Kadina and Moonta residents are strongly aligned to their own supermarkets with little cross-shopping to other centres. At the time, Wallaroo residents divided their food spending between Wallaroo and the close and larger centre of Kadina. The new Drakes supermarket at Wallaroo in 2015 is likely to have captured a higher share of local food spending. Survey data on the more discretionary clothing, household goods and other non-food products showed that 33% of Copper Coast residents shop in the Adelaide CBD on a monthly basis and 50% in other Adelaide centres on a similar frequency. Modelling the behavioural responses to all centres and applying differential spending levels by frequency of visit, indicates that Copper Coast residents direct about 39% (or $28.4 million in 2018) of their available $72.4m of non-food spending to centres in Adelaide.

This is a significant level which could be captured by a wider and better range of retailers in the three main centres of the Copper Coast. 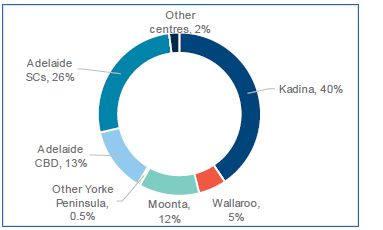